Urbanisme & Démocratie in the 14th district in Paris

In the large cities of the 21st century the citizen has fewer possibilities than ever to have a say concerning the urban environment and the housing problems. When the authorities decide to let speculators take over bits of the city the individual citizens usually have little means of controlling these actions as alone they have no power. The story of Urbanisme & Démocratie in the 14th district in Paris is one of the notable exceptions.

In this neighbourhood people grouped together and formed an association which for thirteen years among other things has fought against speculators and for more social housing and a better urban environment. They began by refusing to submit to the diktats of the city fathers who attempted to eliminate a promised green park in order to allow speculators to build and then became concerned with the problems of housing, and homelessness, of urban renovation and of local participation.

This association originated during a specific struggle over one green park but then took up other concerns in the neighbourhood. The first action evolved after the city had marked a city block, “Bauer Thermopyle” to become a green park but then, after having expropriated the inhabitants over a period of 15 years for this purpose, the city authorities then decided to allow the park to be replaced by high rise housing with no additional public facilities. This was in 1993. The neighbourhood reacted immediately to this scandal and the association Urbanisme and Democracy (Ude) was created. 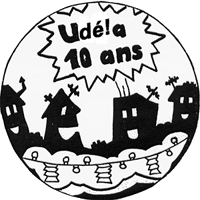 The first few years Ude led the struggle against the “Bauer Thermopyle project” by informing the population, holding meetings, writing petitions, and obtaining the support of many inhabitants. Little by little the city authorities were forced to cede ground. In 1995 a new project was presented; it was less dense than the first but still had no green park. There was a “public enquiry” (1) for this project. Usually this sort of “enquiry” goes through unnoticed by the majority of the inhabitants and receives little or no opposition. In this case the population was highly mobilised and the report of the “commisaire-enqueteur” or officer charged with studying the comments of the inhabitants was negative. “The project of the city lacks any consideration of architecture or city planning.”

For the next five years, because of the agitation of Ude, the city was obliged to organise meetings with representatives of the neighbourhood. Several projects were presented with decreased density and finally they added a little park, the “Jardin Thermopyle”. In 2001 another “enquete public” was held in order to allow the city to expropriate a vacant lot belonging to a building that Ude had taken over, planted and used for different neighbourhood fiestas. The population again came out in large numbers to oppose this project and also to demand low cost public housing rather than the housing for the middle classes that was proposed.

Long before the final outcome of this struggle Ude became involved in other actions in the area. Near by the urban renewal project, the ZAC Didot was being planned and built with no input from the local population. Ude organised meetings; it was decided to block the building site once a week for an hour.

Other more spectacular actions were taken, notably that of a ZACman who hung an enormous hostile banner from one of the high cranes on the site one weekend. These actions were effective in bringing about a few changes in the plans for the ZAC, in particular adding more public housing and the rehabilitation rather than the demolition of a large, handsome 19th century building in the ZAC.

Affordable housing is a serious problem in Paris. Ude began to make a study of the situation of the homeless and poorly housed people in their area. They took part in several meetings at the town hall of the 14th district at which they made clear their ideas for their neighbourhood; a socio-cultural mixture, adequate social and cultural services and infrastructure, schools, day care, gyms, parks and gardens. Their principle demand was for the municipality to buy and renovate run down apartments and rent them at a moderate cost.

Some of the members began to look into alternate forms of collective housing and came up with a plan for a “pension de famille” to house those in difficulty and/or homeless and unable or unwilling to live alone. Their idea turned out not to be very different from that of the minister of housing as that same year (2002) a paper was circulated officially recognising what was called “relay houses”. Little by little this idea has taken form and by 2006 it has become a reality. The plans for this “pension de famille” have been drawn up and approved. It will be built in the neighbourhood next to the fiesta square (place des fêtes).

More important a new association has been created that will be the manager of this house. This is a rare example of a neighbourhood association that has created a form of social housing that will be managed by their members.

During the period in which this project was being developed the urgency of the housing problem became more visible to Ude. Rental housing was becoming more and more expensive on the free market and public housing scarce. In Paris during the spring and summer of 2005 there were several tragic cases of run down hotels housing immigrant families burning down causing death and many casualties.

In the 14th district thirty families mostly immigrants from Africa who had occupied an empty building 4 years before and brought it up to standard were evicted by the national police in September 2005. This occurred in spite of the fact that they had many people in the area including members of the municipal council and the Mayor of the 14th district who supported them. Because of this support and the publicity given to the affair they were re-housed after the eviction but in hotels, one family to a room and the rent was paid for only 15 days.

After this event housing collective was organised by Ude which grouped different individuals and associations together with those who are in need of decent housing. The object is to publicise the acute housing crisis in Paris, to show the terrible conditions in which many people have to live and to find solutions.

To bring home to the members of the municipal council what was happening in their city during a special meeting in the 14th district one of the women who is particularly poorly housed put on a little sketch showing what it was like for a family of 4 to live in 7 square meters. She was very effective and in the discussion that followed the collective was able to stress the major housing problems, the lack of public housing, the evictions without relocation, the slum lords manoeuvrings, the exorbitant rents etc.

At this meeting members of the housing collective suggested that a the municipality create a housing service that could help prevent evictions by treating each case as soon as there was a problem and by hunting for decent housing, arranging for the caution to be paid by a special fund find housing in the private sector rather than have these families live in unsanitary and unsafe hotels. In the end the mayor said he would call a meeting in January to finalise these ideas (but he delayed that meeting until June).

Meanwhile the collective has been continuing to publicise the housing problem and to search for solutions. They hold mini demonstrations once a week over coffee and croissants in a square in the neighbourhood at which people are informed of their activities.

In the thirteen years of its existence Ude has taken up many of the problems and struggles in the area.

In many cases as with the “Pension de Famille” they create a separate association specifically geared to dealing with the question. Thus when a large hospital complex “Hospital Broussais” planned to move out and sell a number of buildings and the shady streets and other space it had occupied Ude stepped in. It was feared that the whole area of the hospital be sold to speculators. The people in the area were informed and invited to give their ideas as to what the hospital grounds should become. A questionnaire was sent out and meetings were called to discuss the future hospital grounds.

A separate committee was formed called “Lets Redesign Brousais” to continue to concentrate on having the population give input into the future of this space. Their work has achieved certain results. It became clear to the different authorities involved that they would have to treat the population as a partner. Some of the social and cultural ideas suggested by this committee have been accepted in the plans for the area.

The municipality has begun to do so. Another spin off from Ude has been the creation of a “café associatif” or neighbourhood café run by members of Ude and others from the area. This café is used by many groups in the neighbourhood for meetings and the café also brings together the local population for cultural events and parties and has become a kind of focal point for Ude.

Four times a year Ude has a fiesta in the open space with that name. These events bring together the active and less active members of the association as well as other people in the neighbourhood who learn of the actions of Ude. 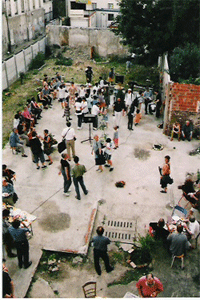 Who are the members of Ude?

They are primarily young and middle aged, a few older students. Their socio-cultural background is mixed but there are only a few who do not have a university education. They are representative of the population of Paris which has chased much of the French working class out to the suburbs.

The housing collective as I mentioned has many members representing the very poorly housed in the area, those whose whole family live in tiny hotel rooms for instance. Ude has avoided the trap that many associations fall into. What often happens is that a small group or sometimes one or two people take on most of the responsibility while the other members are simply helpers. Ude has managed to change its president and some of the members of the board approximately every two years.

The activities of Ude go to show that determined citizens in the large metropolises of our times are able to have an impact on their urban environment even when the authorities are hostile. Moreover what we learn here is that while at first the association took up a problem of immediate importance to the local population, i.e. the loss of a park that had been promised them, it then turned its attention to the problems of those whose voice was never heard, the homeless, the immigrants, the poorly housed and others who without support remain powerless.

Proposals for a global strategy

This is an example of how local people can have an impact on their local environment.

For governments to take action on the immense housing problem and other major stakes of urban space, citizens must continue to bring these problems to light and put pressure on their elected officials. For cities to be adapted better to peoples needs there must be the possibility for the local inhabitants to exchange ideas and participate in creating their local space. Local governments must be transparent and open to working with the people.