Atlanta: clearing homeless in the name of economic revitalization further privatizes downtown in what is called “tourist triangle”

The systematic removal of public housing and the gentrification of inner city neighbourhoods has exposed up to 68,000 Atlantans to homelessness each year. When those invidividuals also find themselves sick or dealing with addictions, they are likelier experience difficulty accessing the service system on a consistent basis. Therefore we can say that lacking private space of their own, they are then excluded from public spaces through a consistent process of being exposed to laws that attempt control their public behaviour.

The city administration’s continuing practice of dealing with homelessness as an issue of public “safety,” ignores the reality that there is no housing in the city of Atlanta that is affordable at a minimum wage salary.

40% to 60% of homeless people earn some income. But the “housing wage” in Atlanta for a two-bedroom apartment is $15.73 per hour. And gentrification is the city’s only housing policy. Excluding working poor people from housing is accomplished by means of replacing affordable housing with housing that rents or sells for more than 3 1/3 times minimum wage, which is still only $5.15/hour.

If a worker in Atlanta needs to earn $15/hr. in order to afford Fair Market Rent for a two-bedroom apartment, and we have privatized and getrified public housing, it is easy to see that the local and national governments’ refusal to provide housing for its workers and for those on fixed incomes results in growing numbers of excluded individuals and families who live in shelters and work every day. And they are the lucky ones.

The dismantling of public housing and the refusal of communities to provide inclusionary zoning that enables the location of low income housing have resulted in 3 1/2 million people living in the United States without homes. That means 1.5 million to 2.1 million people with incomes cannot afford housing at all and live in homeless facilities or on the streets.

The streets and other public space are controlled by private interests through the executive and legislative branches of the city as well as by means of their own private security forces. And since homelessness is described to tourists as a public safety issue, this privatization of public space is excused under the guise of making the city a safer place for tourists and other customers. Businesses have for twenty years maintained the attitude that excluding poor, majority African American males from the city center is necessary for the development of the downtown.

The first step towards excluding those people deemed undesirable is to name them. Thus the tagging of the city center by Central Atlanta Progress, “The Vagrant Free Zone.” (1) That term was then softened, as advocates and activists from around the country criticized the city’s discrimination policies and shamed CAP and the city into calling it subsequently a “Safeguard Zone,” and now, “The Tourist Triangle.” 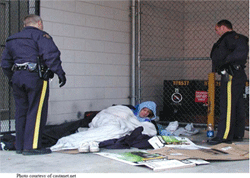 These exclusionary policies result from racism that is evident throughout Atlanta’s history. Most recently even shelters which are built on valuable land are removed, and finally the local government, prodded by the private business community, takes civil and human rights away. Jails, regardless of their development and operating expense, are the housing of choice that the Atlanta business community continues creating for poor, overwhelmingly black, Atlantans.

Homeless people are twelve times more likely to be arrested than housed people. 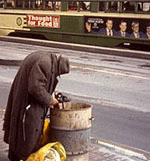 The new ordinance states that the presence of begging homeless people in the business district “contributes to the negative perceptions” of the city, “causes a sense of fear and intimidation” among visitors, and “increases potential criminal activity” near banks and public areas. With this legislative action, Atlanta joins dozens of other cities in the United State that routinely criminalize activities that homeless people find necessary.

Laws criminalizing essential activities such as sitting, sleeping and bathing violate basic civil rights and make homeless people—who have no other option than to perform these functions in public areas—targets for harassment and arrest.

During the nearly ten months since the passing of the Tourist Triangle Panhandling Ban, advocates led by the Task Force for the Homeless have met with police, we have computerized arrest records and found that the police are not enforcing this ordinance, because as Lieutenant Boyce says, “The ordinance is too vague.” What they are doing instead is using whatever ordinances they have on the books that have allowed them to continue arresting and harassing homeless people.

Disorderly Conduct, or DC 6 as it is known on the streets, is the catch-all ordinance that contains language general enough to include being in a known drug area. Homeless people are routinely stopped and asked for identification, and if they cannot produce that ID, according to Lt. Boyce, they are taken to the City Detention Center and held. Warning tickets are reserved for housed people, claim the police. Without identification and no permanent address, homeless people are assumed to be criminals. 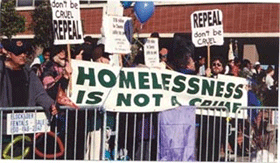 Both the ACLU and the Task Force for the Homeless Legal Fellow are working to screen potential plaintiffs for a challenge of the Panhandling Ordinance. In the mean time, organizations like the Task Force and The Open Door Community and the Martin Luther King, Jr. Committee for Economic Justice monitor the actions of City Council, and the Mayor’s Office, controlled by the business community, as they plan for the complete re-zoning of the city.

The latest in a series of moves to make homeless people uncomfortable and unwelcome is the removal of benches from downtown Woodruff Park. Rumor has it that there will be one park designated for feeding homeless people publicly. Although there is no law against publicly distributing food, the Mayor issued an Executive Order disdaining the practice and implying that defiance of the Order is illegal. Police tell faith community groups that they will be breaking the law if they feed homeless people in public, and that warning is usually a sufficient deterrent.

Our mission at the Task Force for the Homeless is to advocate with and to represent the dignity and rights of people who are homeless in our society toward the goal of preventing homelessness and seeking appropriate and affordable housing and services for all.

Advocates from civil rights organizations have characterized the panhandling ban as primarily racist, pointing out that the majority of homeless people in Atlanta are black.

Public policies must be changed by dramatic and urgent demands of the people, the organizers, advocates, activists and grassroots organizations, who are the only hope for reversing this oppression through actions, street presence, litigation and voter registration campaigns. This combined approach, orchestrated by homeless, formerly homeless and never-been-homeless advocates through organizations and networks has brought this issue to the attention of the public, and public political action can change public policies.

The residents of the streets and shelters in Atlanta are routinely registered to vote and then provided transportation to exercise their voting rights. Candidates are presented to the voters so that they can see the numbers of voters living in shelters, transitional housing and on the streets who do vote and will hold them accountable.

Advocates from The Open Door Community and others continue a weekly presence in Woodruff Park, putting their bodies on the line in support of the rights of homeless people to use the park.

Facilities and organizations serving homeless and formerly homeless people must continue networking and providing opportunities for people served to join in the advocacy efforts and policy activism. The risks involved in actions that criticize the policies of the City, the State and the Federal governments obviously occur first in the loss of funding and resource support. Therefore, groups must join to support each other in those efforts. Organizing non-profits, who normally compete with each other for resources, is the most difficult kind of organizing, where compromise and division often destroy effectiveness.

However, networking with groups in other countries, where the culture of resistance is strong and healthy can provide inspiration, motivation and training to groups in the US.

1. The right to housing must be acknowledged by Federal, State and local governments and enforced.

2. A moratorium should be declared on evictions and on the destruction of public and social housing.

3. A certification that the community has not enacted laws that criminalize homeless people (like HUD requires) should be a legal and enforceable document required for receipt of any and all Federal funds. (It is now required as a signatory document for all judicatory heads in order to reveive public funds). Violation of this certification will carry actual consequences, including the loss and withholding of funds for those municipal governments that attempt to make homelessness a crime.

4. All foreclosed property in the hands of federal, state or local government must be first offered to homeless people or organizations serving them.

5. Those people living without housing should be added as a protected class to the federal hate crimes law.

6. All people must be guaranteed access to voting rights without the use of provisional ballots. All state barriers to voting for homeless people, including identificaiton requirements, must be eliminated.

7. A listing of the individual’s civil rights must be posted in all federally funded facilities serving homeless people including public transit systems and emergency rooms.

8. A resident advisory board is required at all publicly funded shelters or facilities serving homeless people.

9. There shall be no discharge to the streets or to emergency shelters from public systems including alcohol and drug, mental health, corrections facilities and hospitals.

10. There must be a simplification and standardization of the federal definition of homelessness. At this time there is a different definition for each federal agency. There should be one and NCH recommends the Department of Education definition.

11. The US General Accounting Office should develop a federal hate crimes study to document the extent of the problem in cities and rural communities throughout the United States.

12. All programs and agencies should protect and defend the rights of homeless people to privacy, freedom of movement and sleeping, sitting, or standing without fear of harassment.

a. No requirement of any information in exchange for publicly funded services.

b. Services and shelter should have no relationship with law enforcement.

c. Identification should not be required to obtain homeless services.

13. There should be presumed eligibility for homeless people for federal programs such as, General Assistance, Food Stamps, SSI and Child Support, etc.

14. All facilities should be empowering and allow the individuals or families to find stability and community support.

b. All publicly funded shelters should allow homeless residents to have input into the rules and governance of the facilities.

15. There should be enacted Federal legislation making it illegal to exploit alcohol addicted and disabled people who live on the streets by video taping them doing extreme acts or fighting. (Bum Videos and “Crack Addicts Gone Wild” are examples)

National Coalition for the Homeless Washington, D.C., ‘A Dream Denied: Criminalization of Homelessness}, 2006.

Metro Atlanta Task Force for the Homeless, Homelessness in Atlanta, 2004.