Graz, City of Human Rights in Europe or the Right to a “Human City” in Europe?

Graz, capital of Styria, is situated in the South of Austria and has borders with Slovenia and Hungary, lying at the crossroads of many European cultures. Romanic, Slavic, Magyar and Alpine-Germanic influences make its identity culturally unique. It is also a place of international encounter and intercultural and inter-religious dialogue. About 300.000 habitants live in Graz. 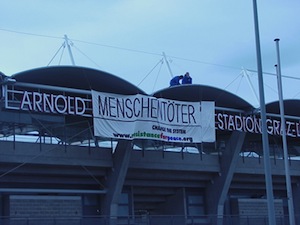 In September 2000, the Austrian Foreign Minister Mrs. Benito Ferrero-Waldner announced at the 55th session of the General Assembly of the United Nations that Graz will be the “First Human Rights City in Europe”. In February 2001, endorsed by the City Government, the City Council of Graz took the unanimous decision to declare Graz a Human Rights City and to commit itself to base every decisions and acts firmly on a human rights basis so that the human rights standards would be respected in all the decision-making of the leaders. This commitment, implemented by a process of several years has been monitored by European Training and Research Centre on Human Rights and Democracy (ETC): in February 2001, ETC and the most important institutions and organizations of Graz (NGO’s, universities, political institutions, etc.) set up a “Steering Committee” (representing all sectors of society), assuming the task to guide the process. For this purpose, an analysis of the context, problems of human rights and good practices were elaborated, followed by a strategic program of action that was developed, addressing all actors, state and the whole community involved in human rights issues for defining the future steps in the development of Graz towards a Human Rights City.

For the vulnerable rights and against discrimination

An important list of social and humanitarian activities were listed to qualify the city for the process of becoming a Human Rights City: for example, with the help of private initiatives and NGOs, searches to provide accommodation and services to homeless people, as well as a minimum social support to everybody in need; the city has also supported several projects of NGOs concerned with the issue of violence in the city, drug abuse, peace and development.

Regarding its mission of welcoming refugees, in December 2001, Graz has been awarded the price of UNHCR for the most refugee-friendly city in Austria and also welcoming refugees from the ex-Yugoslavia, and more particularly Chechnya. Some NGOs are especially dedicated to support them, sponsored with private or public funds. In a joint action with the International Pen Club, Graz also gives scholarships to writers in asylum in an initiative on “Cities of Refuge”.

Consequently, right-wing movements are reacting with much violence and extreme racism, pointing out the foreigners and the refugees.

As to the fight against racism and discrimination, the city of Graz implemented a “Commission of the Wise” in charge of detecting human rights abuse. It publically denounces all the publications, documents or speeches that can be considered as xenophobic in a monthly press conference. Other measures include the establishment of the first Council representing foreigners and migrants living in Graz, and seminars against racial discrimination with participation of the EU Monitoring Centre against Racism and Xenophobia.

In terms of religious acceptance, it represents as a platform for the interreligious dialogue: Visit of the Dalai Lama within the framework of an interreligious meeting, Youth meeting 2006, World Meeting of Imams in 2003, Interreligious Consultation Council that meets various times a year, etc.

Since 1999, Graz is included in UNESCO’s list of World Cultural Heritage Site thanks to its old city center, a well-preserved and unique ensemble of different architectures. It is strictly protected by two specialized services in charge of permanent safeguarding and preservation of the historic centre: they regulate and control the works undertaken; they are in charge of rehabilitation projects and of managing the Programme of Urban Renovation, of the overall control of traffic and car-parking issues; they define the areas reserved for pedestrians; monitor of the flow of the river Mur to prevent flooding; handle and control tourism as to protect the lives of inhabitants.

Graz is an example of town-planning as it succeeded in promoting a dynamic social life while maintaining over the centuries the harmonious integration of old buildings built in successive architectural styles, with green public areas making it environmentally friendly, conserving a human scale in a contemporary modern city. New modern constructions, symbols of dynamism and growth and created by renowned architects, are authorized with elaborate precaution and submitted to a competition process, and always controlled by protection associations dedicated to the conservation of the historical city.

Graz is also one of the two European cities of the list of 17 to be integrated in the Human Right City Program of the People’s Movement for Human Rights Learning (PDHRE), that was founded in 1989 and “seeks to provide a framework for serious global debate among groups working for social and economic justice”.

In 2003, Graz was named « Cultural Capital of Europe » by the EU Ministries of Culture.

The City of Graz founded an award for extraordinary achievements in favor fo human rights at local level, to be granted every second year. Its statutes defines the award as follows: “Besides highlighting the merits of the award-winners, the « Graz Human Rights Award » ought to permanently anchor the pursuit of more justice as well as the implementation of human rights in the eyes of the public, as well as the active role that cities and local communities play in this.” For instance, the Federation Ombudsmen were granted the award in 1997 by unanimous decision for their human rights protection work in Bosnia and Herzegovina inthe period 1995-1997.

An example of good practice for the respect of human rights

Since 1997, the local sports arena stadium was named Arnold Schwarzenegger Stadium, as a kind of fealty toward the poor farmer’s son and international celebrity who was educated in Graz and had always identified it as his native place. But Schwarzenegger, after becoming governor of California, refused to commute the death sentence for the leader of a gang in Los Angeles, Stanley Tookie Williams, who was then executed in California in 2005. The reaction of the City Council of Graz, considering death penalty as a medieval and inhuman practice was to remove Arnold Schwartzenegger’s name from the 15.000 seats arena stadium.

Graz focuses on the implementation of many policies promoted in the guideline of the Charter for the right to the city: protection of the most vulnerable, democratic management of the urban properties, struggle against discrimination and social segregation, collective right to housing and access to service, stimulation of good practices regarding human rights through awards.

At a local level, the city of Graz have been generating legal instruments aiming to consolidate the human rights in the urban context, focusing on the inclusion and the protection of the most vulnerable populations, promoting dialogue and coexistence between multiple communities, recognizing their dignity and respecting their cultural or religious differences. At the same time, the city struggles against environmental degradation, and also promotes the right to enjoy sustainable urban spaces. The condemnation of unfair and xenophobic practices in the permanent monitoring shows a clear intent to implement the respect of the human rights and the integration of justice in the daily life of the inhabitants and in the local urban management.

In the main economic, social, cultural, political and spatial areas, Graz seems to aim an equitable and equitative usufruct of the city for its inhabitants, regardless their ethnic origin, belief or social class, making efforts to establish the basis of the right to the city in Europe as a way of living, allowing the inhabitants to own their city, monitor the governors’ decision regarding the construction or preservation of the city they want to live in.

www.hic-net.org/document.asp?PID=62, “World Charter for the Right to the City

www.iht.com/articles/2005/12/26/news/austria.php, “A Schwarzenegger backlash in Austria”

www.pdhre.org/projects/hrcommun.html, “Human Right Cities - a practical way to learn and chart the future of humanity - PDHRE”