Homeless People Fight for the Right to Housing in Mar del Plata, Argentina

The city of Mar del Plata is located in the southeast of the province of Buenos Aires in Argentina and holds a population of approximately 700,000 inhabitants. The city is unique in that it was founded on private property in 1874, thereby violating the law. This illegal foundation led to a unique urban development where the manner in which land was distributed — and to whom it was distributed — depended on a small number of land owners. Historically, the most underprivileged social groups were evicted from central areas and relocated to areas that were inadequate for housing (very rocky, susceptible to flooding, lacking public transportation and infrastructure, etc.). This violence, physical and symbolic, practiced by the dominant social groups, was compounded by the historic absence of urban land and housing policies from successive local governments.

Currently, between fifteen and twenty percent of the population of Mar del Plata inhabit 219 precarious settlements and villas (1) dispersed throughout the city in situations of extreme poverty. Official sources estimate that approximately 11,000 households are in need of emergency housing. In the midst of Argentina’s severe economic crisis in 2002, a dialogue group was formed by various social actors to address the necessity of emergency housing as a form of political and economic restructuring and social re-composition. The product of this meeting was the creation of the Plan Federal de Construcción de Viviendas (Federal Housing Construction Plan) which would finance the construction of housing for low-income social groups through different programs to be implemented by the Institutos Provinciales de Vivienda (Provincial Housing Institutes) with federal government funds. Based on this initiative, the sub-program Bonaerense IX-Dignidad (IX-Dignity of Buenos Aires) was formed in 2005 in the province of Buenos Aires, aimed at “eliminating inadequate housing and overcrowding.” In Mar del Plata, the program was charged with building 500 houses in order to remove the inhabitants of Villa Paso, a proposal which dated back to 1999. Paradoxically, Villa Paso was located in an urban area with decent living conditions and high social and economic value. At the same time, the municipal government created a registry of emergency housing to allocate 2,018 homes that would be constructed under the framework of the Plan Federal de Viviendas (Federal Housing Plan), financed by the national government. 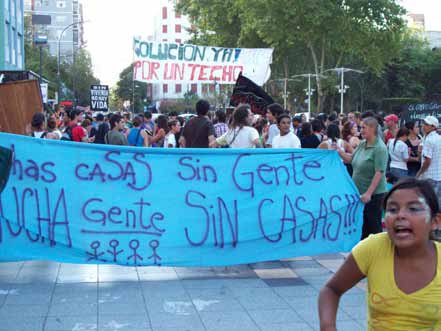 “The poor are needed for their hands, as workers, but the city dominated by the market was not built to provide them shelter,” - Oscar Pagni, former Technical and Legal Secretary of the Gral. Pueyrredon Municipality and author of the Villa Paso relocation project, March 1999.

“It means changing the look of Mar del Plata and changing the urban development of important neighbourhoods,” – Councillor Eduardo Salas; Debate on the Villa Paso relocation project, Minutes from the Meeting of the Honourable Deliberating Council, 16/07/99.

These two statements illustrate the denial of the right to the city in the terms set out by Henri Lefebvre, through an authoritative and alienating eradication-relocation policy, which produces social inequality and vulnerability. One of the objectives of the sub-program was effectively to “break certain social ties,” which resulted in the 500 houses being distributed in three different locations: the neighbourhoods of Las Heras, El Martillo; and Don Emilio. All three of these neighbourhoods were lacking in basic infrastructure services and a means of social consumption, had limited means of public transportation, and were subject to flooding, etc. This in turn affected residents’ sociocultural identity, created tension, uncertainty, social disconnection and deterioration of living conditions, all due to the forced uprooting. Also, the resulting conflicts in the inhabitants’ new neighbourhoods compelled the then-mayor to issue orders that inhabitants of those neighbourhoods would be obliged to carry a “certificate of good conduct and police record,” according to those interviewed.

A high percentage of the homes were allocated even before they were finished and with serious construction problems:

“There is no hot water, the toilets are loose, and there are leaks and moisture. The water heaters have major problems and the sceptic tank isn’t working. Some had to damage their houses to install pipes.”

“They took people out of the Villa without giving them anything. Now they want to do the same thing to those who are left…” - Personal interviews.

However, the main component of the program was suspended in 2007 in two of the neighbourhoods (Las Heras and El Martillo) when the two construction companies stopped work after building had barely begun, claiming that costs were higher than projected.

On March 23, 2008, more than 200 households living in extreme poverty and emergency housing situations collectively decided to take back the land, along with more than 40 semi-constructed houses abandoned by the construction company. This occurred after several years of fruitless waiting and after registering with the aforementioned Emergency Housing Registry.

“I tried to get housing through the municipal government: I have the paper, like the majority of people here…Supposedly they were going to give me a house because my situation is very urgent, but it has already been a year now and I’m still here waiting for a response…”

“Between everyone a case was filed … for the chance to get a housing facility that can be paid for per month. It’s already been almost three years since the note was sent and I still haven’t received a reply…” - Personal interviews

“…no water, no sewage… it rains and everything is flooded because it’s right beside the bridge… we’re living below the bridge…”

However, brutal police repression forced people to return to their original neighbourhoods that same day. Nevertheless, the Junta Vecinal Sin Techo (Homeless Residents’ Committee) began to reorganize with protests, petitions, filing of complaints and other initiatives in the search of a concrete solution to their housing problem.

A year later, on January 15, 2009, 54 of these households returned to the site with a great deal of support from a solidarity network and backed by a legal injunction. However on the same day, the construction company in charge of building the complex filed usurpation charges, and thus justifying their inability to continue work on the project which had been abandoned in 2006 for the previously mentioned financial reasons.

The land occupation was not limited to the demand for housing. It included a much broader self-managed project as demonstrated by the development of community gardens and relationships with cultural groups, artists’ groups, university students, teachers, workers, social organisations and residents of the area who supported the homeless’ initiatives with workshops on literacy, academic support, and sexuality, as well as periodic protests throughout the city. In other words, recovering this space transcended the immediate right to housing and involved the right to the city in the sense that the value of the use of space was recaptured; appropriation took precedence over domination, as Lefebvre proposes. It represented the reconstitution of a series of inalienable rights: housing; health and education.

On April 10, 2009, the court ruled in favour of imminent eviction from the recovered site and scheduled it for the 17th of that month. Starting on the 16th, the “camp for dignity” and resistance to the eviction were organised, bringing together different social organisations, students, professionals, artists, etc.

On April 17, 2009, eviction from the site was carried out with heavy-handed repression from various police forces. The eviction was unconstitutional as only one of the conditions of all those stipulated by the judge for carrying out the eviction had been met: it was not raining. Insufficient conditions included, among other things: the prosecutor who gave the eviction order left before the eviction was carried out; there was an insufficient number of ambulances present; there were far more police officers than persons being evicted; and these officers were not properly identified.

During five long hours, representatives of the homeless, their defense lawyers, and the author of this paper - as the person responsible for presenting social housing reports to the court - attempted to speak with the various prosecutors about the unconstitutional nature of the eviction. However all of the forces that enforce urban order fired their weapons of repression in an act meant to instruct and discipline society:

“…the police were so brutal, they treated us like animals, and unfortunately we had to abandon our neighbourhood, we ran for fifteen blocks. At that point it wasn’t just about the houses… they didn’t care about human life. They wanted to kill us like dogs, destroy our houses, they broke down the doors that we made with our own hands. The construction company is just another example of all of this shitty corruption. They want to come and kill us like rats and that’s what they do.” - Interview with Adriana.

Families went where they could. Some went to neighbours’ or relatives’ homes, but most went to the Centro Cultural America Libre, an area recovered in 2006 but which did not contain enough structures to house as many people as were seeking housing there. The site of their former housing was left unoccupied.

“First they ask you for your identification, and if you don’t have an address where you can leave your things, they don’t let you go inside to get them. And if you don’t have a way to transport your things, they won’t let you in either. That’s what was said there…” - Personal interview, speaking of police restricting residents’ access to gather their belongings after the eviction.

Starting the next day, direct action was organised throughout the following week: protests; mobilizations; various artistic activities, etc., demanding an immediate solution. After fifteen days they achieved their goal: a working group was formed composed of representatives of the homeless, the political bureaucracy, councillors from the various blocs, and the author of this paper, to analyze the long-term and short-term proposals for the households.

Four months after the eviction, they succeeded in obtaining: 41 sites bordering the recovered land; five Federal Plan housing units for households with the appropriate socio-housing scores, as per the Emergency Housing Registry; a subsidy for nineteen households to aid in possible temporary rental housing; and financing from the national government for the construction of 41 housing units o