On August 2005 the Hurricane Katrina devastated New Orleans and the Gulf region, leaving behind unprecedented damage and rendering thousands of people homeless. The damage or destruction is calculated over 130,000 homes or 72 percent of all occupied housing units in New Orleans, the loss of hundreds of lives, and catastrophic human suffering.

The U.S. Federal Emergency Management Agency was unable to coordinate a hurricane response plan, and as a result helped direct ten of thousands of people to unsuitable shelters – without water, without food, in the midst of sweltering heat and spreading disease. It’s important to emphasize the damage from Katrina disproportionately affected low-income residents and African Americans. The government has failed to provide adequate housing for most of 250,000 New Orleanians who are displaced – the federal government is ending rental assistance programs for many of the displaced, there are federal plans to demolish most of New Orleans’ public housing, and there is a general lack of affordable housing in New Orleans, where rents have increased by 25 to 100 percent. 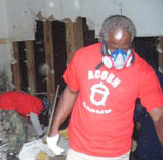 More than 1600 people died this day, most of them were black. The government helps some of these people (20,000) by hosting them into an overcrowded Superdome Stadium without water, light, medicines or food.

Actually the Superdome was rebuilt with an investment of 185 million dollars. For most of the affected people it is impossible to buy a ticket there. The government gave 100 million dollars for rebuild the city, but due to bureaucratic problems only 44 millions have been pay out. Thousands of people left the city searching a new life and many devastated residents don’t even qualify for the rebuilding funds. Each state makes its own rules, and so far Mississippi’s program that provides grants up to $150,000 leaves many people out – especially poor people.

This article details some of the initiatives taken by ACORN during 2005 and 2006. There are two focuses of ACORN actions: housing and jobs. If you have a job, then you will find a house and live somewhere or just about anywhere. If you don’t have housing, then there is no way to find a job or hold onto it. Looking down from these two twin peaks, one sees that for families there must be schools and for the elderly, there must be good health care. Both prevent either group from exercising the “right of return”. There are now five school systems in the city with questionable value. There are relatively few health care choices in the city, so the result is much the same.

In August 2005, there were more than 9.000 ACORN member families in New Orleans, making ACORN the largest grassroots membership organization in the city. One year after Katrina, 7.500 ACORN families still have not returned to New Orleans. Nothing has been done by the government, especially at the city and state levels. The city is being rebuilt block-by-block, house-by-house, by citizens banding together with their organizations to prove that they want to live in New Orleans and are coming back.

ACORN, the Association of Community Organizations for Reform Now, is the nation’s largest community organization of low- and moderate-income families, with 220,000 member families organized into 850 neighbourhood chapters in more than 100 cities across the country. Since 1970, ACORN has taken action and won victories on issues of concern to our members. ACORN’s priorities include: better housing for first time homebuyers and tenants, living wages for low-wage workers, more investment in our communities from banks and governments, and better public schools. ACORN achieves these goals by building community organizations that have the power to win changes – through direct action, negotiation, legislation, and voter participation.

In 1986, ACORN Housing originated from neighbourhood-based campaigns conducted by ACORN. ACORN Housing is a national, non-profit organization that provides housing counselling and education services to low- and moderate-income families. Since its inception, ACORN Housing has grown to 40 offices in as many cities. The offices provide mortgage counselling to more individuals than any other group in the country. ACORN Housing is also the national leader in assisting victims of predatory lending by providing refinancing at improved terms, through loan modification and by conducting outreach that teaches how to identify and avoid predatory loans. ACORN Housing has helped more than 50,000 low- and moderate-income families realize their dream of buying a home.

Despite the initial efforts of ACORN members, toward the end of December 2005, the city administration began to bulldoze 2,500 of the most severely damaged homes without contacting homeowners. Many homeowners from the most devastated areas were unable to return to New Orleans and by tearing down their homes without warning; the city did not provide these residents with an opportunity to protest further destruction to their property. ACORN worked with legal and community partners to file suit against the city for its failure to notify homeowners of the demolitions. On December 28, ACORN members won a temporary restraining order to delay the bulldozing. Two weeks later, members won a settlement that required the city to notify homeowners of demolition and provide them with the opportunity to appeal.

The initial government planning efforts appeared to shut out the displaced, primarily African-American residents. A member of the Mayor’s rebuilding commission, Jimmy Reiss, spoke out loud what many ACORN members feared: “Those who want to see this city rebuilt want to see it done in a completely different way: demographically, geographically, and politically.” To counter an exclusive rebuilding process, ACORN members and organizers began their own grassroots, collaborative city planning process.

The week after the Forum, the Urban Land Institute (ULI), working for the Mayor’s Bring New Orleans Back Commission, released “A Rebuilding Strategy, New Orleans, LA.” The ULI report recommends a three-stage redevelopment process, and its key recommendation is to rebuild first in “Priority Areas,” or areas with the least hurricane damage. According to the ULI report, the most heavily damaged areas of New Orleans would receive rebuilding assistance last.

In December, more than 100 ACORN members attended meetings with the Urban Land Institute in cities where many Katrina Survivors were living, including Houston, Baton Rouge, Dallas, Fort Worth, Texas, Memphis and Tenn. Displaced residents voiced their opposition to the proposed redevelopment plan and demanded a greater role in creating future plans.

The Mayor’s Bring New Orleans Back Commission decided to support a slightly different version of the ULI’s tiered redevelopment plan. The commission proposed to direct resources first to “Immediate Opportunity Areas” that received little or no flood damage. Neighbourhoods that were not “Immediate Opportunity Areas” had from January to May to prove their viability during an official city planning process.

The ACORN Katrina Survivors Association has used direct action, public pressure and regular negotiations with Federal Emergency Management Agency (FEMA) throughout the first year after Katrina to ensure that FEMA continued to provide disaster housing assistance to displaced survivors. ACORN use public pressure, direct action, and dialogue with elected officials and public policy experts to win respect and a voice for survivors, the resources needed for families to survive and a rebuilding plan that builds stronger communities for all.

ACORN members have fought to preserve their homes and neighbourhoods during the year following Katrina. These battles started just weeks after the storm devastated the Gulf Coast region, also during a time when New Orleans city officials prohibited Lower 9th Ward residents from entering their neighbourhoods. Early reports from the city administration estimated that the city would have to bulldoze 50,000 homes.

As of August 1, ACORN had cleaned and gutted 1,450 homes. Today, there are more than 1,000 homes on the waiting list and more than 5,000 volunteers have helped with this project. During the first few months of the ACORN Home Clean-out Demonstration Program, the same professionals that repaired the ACORN headquarters began working with ACORN to clean and gut homes free of charge. At the Program’s peak, ACORN gutted 100 homes per week.

ACORN Housing’s counsellors continue to advise Katrina-affected homeowners on payment agreements and foreclosures. Since the storm, ACORN Housing counsellors have worked with 14 lenders to remove hurricane-affected homeowners from the New Orleans foreclosure lists, which decreased community anxiety about a surge of foreclosures. Counsellors have also worked with lenders to design and implement best practices for hurricane-related lending, including post-disaster loan deferments and waivers on pre-payment penalties.

Proposal for a global strategy

In the past year ACORN has demonstrated the desire of the people of New Orleans to return and rebuild their city. Progress has been made on a variety of levels: from organizing the ACORN Katrina Survivor Association to gaining additional federal and state funding; from halting government seizures to bringing the Diaspora to vote; from gutting homes and cleaning neighbourhoods to designing our own rebuilding plans; from helping homeowners gain government aid to stopping unfair lending practices; from offering job training and placement in construction to monitoring education and health care systems. Recently, ACORN won a greater voice for residents in the rebuilding process, with its partner ACORN Housing, now serving as one of the city’s official neighbourhood planning teams.

The reconstruction must include next priorities: better housing for first time homebuyers and tenants, living wages for low-wage workers, more investment in our communities from banks and governments, and better public schools. These goals can be achieved by building community organizations that have the power to win changes – through direct action, negotiation, legislation, and voter participation.

ACORN will continue its fight in the months and years to come as the city faces greater challenges of providing housing, jobs, education and healthcare for returning residents.

The best way to rebuild the city is to listen to its people – both near and far. Together, we will continue to raise our voices to say, we will rebuild our city – for all of us.