To understand the systems, institutions and traditional practices of a comarca (territory, traditional region or local administrative subdivision) of the indigenous Kuna people in the central American Republic of Panama, you must, first of all, understand their world-view. According to that, nothing in this world is isolated or secluded; rather, the opposite is true: everything is interconnected and in motion. Humans, plants, animals and spirits represent dynamic parts within a much greater, more complex, system known as Nabguana, a Kuna term that refers to Earth as nature in its widest sense. 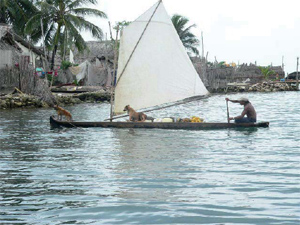 For the Kuna people, all elements have their space, time and function within Nabguana. A work by Valerio Núñez, titled La Obra de Baba (‘God’s Work’), describes the Earth as “the mother of all, the Great Mother. She is the guardian and she takes care of everything with loving attention; she is spirit and we live in her. The great Mother Earth has an attractive force that enables us to keep in balance. Our fathers taught us that the world has eight spiritual layers that contain gold, iron and many other minerals, which serve to sustain Mother Earth. If we allow all of this to be exploited, the trees will dry up and production will diminish. Because of this, we must guard them and not kill them.”

One of the five indigenous comarcas in Panama, the Kuna Yala comarca, is situated in the northeast of Panama and is administered as a special spatial regime, established under Law 20 of 31 January 1957. The Panama government recognizes the rights of the indigenous Kuna people over their lands and forms of traditional culture. The governing bodies of the comarca are the General Congress of Kuna Culture, the General Kuna Congress, the Saila Dummagan, the local Congress and the Sailagan.

In 2000, the Anmar Igar, the codification of Kuna norms, was published. It sought to fill the gaps in some Articles of Law 16, above all, those that related to the administrative boundaries of the comarca. The Anmar Igar also contains certain Articles concerning fisheries. Article 44 of Chapter VII deals with natural resources: “The General Kuna Congress, through the authorities and organs that were established for this purpose, will protect, conserve and guard over the natural resources, such as the flora or forest cover, the fauna, the soils, the waters, the marine and freshwater species, and all biodiversity, in co-ordination with the respective traditional authorities and private organizations”.

Article 45 states: “There will be a closed season for all animals threatened with partial or total extinction, as determined by the regional authorities; large-scale techniques for exploitation will not be used in ways that put the existence of the seas, coasts and lands of the Kuna Yala in danger”.

According to Article 46: “The General Congress will declare marine or land spaces as protected areas and adopt other measures for the conservation and reproduction of species”.

Besides the supreme authority of the Kuna General Congress, there are other groups in the comarca engaged in the administration of fisheries, at the local level, especially for the sale of spiny lobster or crawfish. These are the langostero (spiny lobster) groups, usually made up of five or more persons who manage the group and sell their catch.

The Kuna people have spent fewer than 100 years on the coast. However, they have applied the knowledge acquired on dry land to the coastal and marine areas. This can be seen in their resource management practices, and in the institutions that comprise the comarca. They have also gained new knowledge from their daily man-sea relations, which have enabled them to make a much more profound analysis of the sea and its systems.

Most of the existing traditional fisheries practices in the Kuna Yala comarca are based on the Kuna dryland cosmos vision or world-view; their fishing practices are derived from those undertaken in the rivers. Before they migrated to the coast, the Kunas lived along the large rivers of Panama and Colombia (like the Atrato, Cuenca and Tuira, among many others). From the 17th century, they began to be gradually displaced from these rivers and their tributaries to the coast and from there to the islands where they currently live. This migratory process was gradual, and it was not until the mid-19thcentury that they had migrated completely to the islands. Thus the Kunas’ settlement on the Caribbean islands is relatively recent. It is thus not strange to hear the great wise Kunas in the Onmaked Nega (the Kuna General Congress) affirm that the ultimate destination of the Kunas is on the mighty rivers, which is where the Kuna soul is driven for its final rest.

It was in these rivers that the Kuna developed their fishing gear and techniques. They fished with lances (sur emaked), tipped with poison whose effects were localized and did not contaminate the rest of the river system, and small traps (nasa). Though their fishing activities were once community-based, subsequent contact with the Caribbean coasts from the 19th century caused them to diversify their fishing activities, which became much less organized and community-oriented. Today commercial fishing for cash has replaced community-based fishing among the Kunas.

The Kuna people’s traditional fishing techniques have a low environmental impact and involve the use of small wooden canoes that operate in coastal areas at distances of no more than 12 to 15 miles from the coast, within what is known as the territorial sea. Their catch —moderate quantities of fish, shellfish, molluscs and crustaceans— is delivered to local markets. The Kunas depend on the coastal ecosystems for most of their animal protein needs.

The Kunas’ resource management measures are generally spiritual in nature and depend on taboos, stories, tales and songs, most of which have not been much studied or well documented. The Kunas believe that all marine species were once human beings, with names like Olobiskaliler and Olonaidiginya, until the appearance of Ibeler, who established the inna nega (a tavern). He got everyone drunk and converted them into animals, so that Olobiskaliler became Dulup (spiny lobster) and Olonaidiginya became Nali (shark). It may be for this reason that many of the traditional management practices forbid the consumption of some of these animals.

Rules once existed among the Kunas for the sustainable management of marine Hawksbill turtles (Eretmochelys imbricada) —only half the number of eggs laid could be harvested, and turtles could not be hunted or consumed, since their spirit could cause serious illness. Today, however, turtle meat is traded and consumed in the comarca, turtle eggs are harvested to the maximum, and turtle shells are traded. These commercial activities have caused a decline in the population of turtles in the comarca, despite the existence of a closed season, mandated by a General Kuna Congress resolution of 8 November 2006.

Currently, in many areas of Kuna Yala cash-based trade has displaced the traditional values of hospitality and exchange; fishing and hunting, once strictly subsistence activities, are increasingly practised for the money that can be made. The teachings of Pab Igala (Gods’ laws), and the historical traditions of the Kuna General Congress, which have a great ecological component, are nowadays ignored by the younger generation of Kunas.

Taboos and attitudes towards management and use of natural resources are being rapidly replaced by the logic of the market, which converts everything into saleable products. Though the incentives for this new orientation come from outside the indigenous Kuna realm, the Kuna have only themselves to blame for the current pillaging of their resources for commercial ends. Nonetheless, some attempts have been made to defend their natural resources, language and culture through institutional initiatives and self-government.

It is vitally urgent for the comarca to find new ways to strengthen its model of conservation and sustainable resource management by drawing on elements from the modern world of science and technology. The following basic courses of action can be proposed:

This article was originally published in Samudra Report 54 (november 2009) by ICSF. It is also available in French and Spanish.

Sustainable Use of Marine Resources in Kuna Yala, Panama. www.lighthouse-foundation.org/index.php?id=215&L=1