In Spain, fishermen’s cofradias continue to be the most important organizations for the coastal or inshore fisheries sector. Cofradias are formal public organizations assigned exclusive territorial areas for their activities and represent the interests of the entire fisheries sector. They also act as formal consultative and collaborative bodies of the State administration. There are 299 cofradias in Spain today.

Over the last eight years, Spain’s cofradias have been changing and adapting to the different historical, economic, political and ideological circumstances that have arisen in the management of fisheries as a naturally renewable resource of public use. 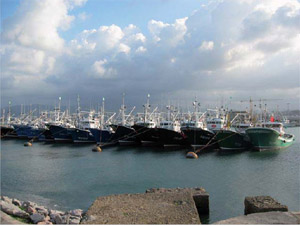 Historically, cofradias have evolved through an assemblage of objectives and functions. To begin with, they were organizations of a religious-welfare nature, like the first cofradias between the 12th and 16th centuries, when their main function was religious advocacy. Later, from the 17th to the 19th century, they functioned as professional guilds or gremios. With the abolition of the gremios in 1873, free associations of producers or vessel owners came into existence, and also mutual assistance organizations (montepíos, positos, etc.). These were maintained until 1939, when, with the end of the civil war, the dictatorship forced a single organizational model onto the fisheries sector in line with the then ruling fascist ideology. It is in this context that the ‘new cofradias’ were imposed as the only organizational form, obligatorily linked to vertical trade union structures and displaying an organizational and representative structure of a corporate nature. In this way, by creating a new model of corporate organizations, the Franco regime institutionalized direct intervention in the fisheries sector, dominating it politically.

Once the dictatorship was over, in 1978, the cofradias had to be transformed to adapt themselves to the new democratic order. However, paradoxically, they maintained their character of public corporations, as well as their organizational and representative structures. But, in the new democratic context, the possibility for the existence of free trade unions opened up in the fisheries sector. Until then, all the new kinds of associations were banned, including those that represented the interests of boatowners or producer organizations.

As publicly owned non-profit corporations, cofradias can be created or disbanded only through a special legal statute. It is legally obligatory for them to be constituted where they do not exist and where there is professional fishing activity. They report directly to the public administration. In order to engage in his profession, every Spanish fisherman must be, in some way or other, associated with a cofradia, although some exceptions do exist.

Organizationally, the cofradias have a representative structure that must include, in equal parts, the interests of the workers (seafarers) and capital (boatowners) in all their governance bodies. The cofradias are formed by an Assembly of all the members of the cofradia, including those who are retired. The General Body comprises all active members with voting rights, while the cabildo (the executive organ) is elected every four years, ensuring parity between workers and owners, and equality between the different sectors that exist in the cofradia, namely, trawlers, seiners, shell fishers, artisanal fishers, and so on.

Executive powers are vested in the Chief Skipper (Patrón Mayor), who acts as president and legal representative of the cofradia. The Secretary of the cofradia is responsible for its day-to-day administration and communication with the public administration. For this reason, in some cofradias, the secretary may even be a public functionary.

Since the law enjoins the cofradia to represent everyone in the fisheries sector, seafarers and boatowners, small artisanal producers (owners and skippers of vessels) as well as the owners of industrial vessels that fish in coastal or inshore water must be present in the decision-making bodies. However, the owners of offshore or distant-water industrial vessels organize themselves through vessel owners associations and not necessarily through the cofradias. These vessel owners may be affiliated to the cofradias but normally they use private associations to organize and represent their interests.

Structurally, the cofradias are vertical and co-operative in nature, and are regulated as a public, not private, body, in contrast to trade unions or boatowners’ associations which have a horizontal character. Each cofradia is provided with an area of coastline over which it has jurisdiction to organize the fishery activities of its members; these are not exclusive fishing areas, but are coastal zones where the cofradias have jurisdiction to organize the logistics of their fishery activities by providing a base for each vessel, and scope for trade through fish auctions.

The cofradias organize fish auctions but do not fix prices. They offer advances to vessel owners from the sales realized in the auctions. They also collect payments from the merchants who normally pay up only after a few days of the auction. The risk of non-payment has proved problematic for a number of cofradias.

Through fish auctions, the cofradias guarantee a certain degree of protection to the producers by ensuring free competition and a continuity of demand. The ‘Dutch’ auction system, in which prices are bid down, offers each productive unit a more or less assured market for its products, with the cofradia acting as the mediator between the buyers and the sellers (vessel owners) but without intervening to fix prices. The cofradias retain a percentage from the buyer and/ or the seller, ranging between 0.5 and 3 per cent of the net amount realized.

In reality, though, not all cofradias carry out all the functions described. The ‘large’ cofradias have commercial markets for their fish catches, while the ‘small’ cofradias have none. Another division is between cofradias that have vessels from the so-called ‘industrial’ fleet—seiners or trawlers—and those that only have an artisanal fleet.

The cofradias do not represent the interests of the offshore and distantwater fleet, which are represented by owners’ associations.

Today an institutional change can be seen in the cofradias with the breakup of the collective model of co-management. This has, in turn, lessened negotiating powers and increased transaction costs.

One indicator of this loss of negotiating powers is the increasing importance of other organizations, like those of the vessel owners and the associations of fish merchants. These associations are beginning to occupy an important part of the political and negotiating space on all issues related to fisheries management and trade, which, until now, was the exclusive province of the cofradias.

For some years now, the cofradias have begun to demand direct State intervention on many issues that traditionally they themselves managed, urging the administration to assume responsibility for the legal framework that they are no longer capable of implementing.

In view of the new economic circumstances arising from the globalization of markets, and the importance of the European Union’s proposed revised Common Fisheries Policy, most vessel owners are opting not to engage collectively in trading their catches through the cofradias. As a result of new autonomous laws that govern the cofradias, such as the Marine Fisheries Law, they can now act directly and legally to commercialize the fish catches of their members. All this is causing an exponential growth in the capital invested by the traders in all aspects of the fish-catching chain, and an associated increase in power of this segment, to the detriment of the owners/fishers/cofradias who no longer have control over the market. Additionally, the political clout of the cofradias is being diminished.

The artisanal sector is characterized by a certain confusion in terminology —inshore fishing (pesca de bajura), coastal fishing (pesca de litoral), smallscale fishing and artisanal fishing are all used to describe the sector. Depending on the contexts, the fisheries activity that members of the cofradias carry out are considered generically as inshore or coastal fishing, which would include trawling, seining, longlining and fishing with small gear.

As corporations, the cofradias organize their management bodies on a ‘parity’ basis, sharing the interests of the vessel owners and the seafarersworkers on a fifty-fifty basis. But these representatives of owners and workers are elected and organized according to the different fleets or gear that exist in each port. Thus, in some cofradias we find a single artisanal section, as in a cofradia catering to vessels that employ small gear, while in others we may find two, three, four or five sections that divide up the power of the cofradias according to whether they use, in addition to the small gear, trawls, seines or longlines, or whether the members are shell fishers using vessels or fishing on foot.

Organizationally, thus, it becomes problematic for the cofradias to ensure full representation of the specific interests of the Spanish small-scale or artisanal fisheries sector (artes menores). It is also difficult to apply differentiated management regimes or forms of representation and participation that would strengthen and revalorize artisanal fishing.

There are now demands from Spain’s artisanal fishing sector for the exclusive use of the coastal zone out to 12 miles, and the restriction of trawling. Demands are also being made for the creation of more marine parks for fishing, which would function like exclusive zones for artisanal fishing.

In the contesting claims between the artisanal fishing sector and the more capitalized, intensive forms of fishing that is growing in Spain, the cofradias, as they are currently structured and functioning, are not in a position to represent or defend the interests of the small-scale sector, as they are mainly composed of representatives of the other fleets. Also, the power of the small cofradias pales into insignificance against the larger ones, or compared to the provincial, regional or national federations.

As things stand, the cofradias, though formally representing the interests of all the fleets, really represent the interests of the majority, which is not the artisanal fishery. Any move to develop and strengthen artisanal fishing in Spain will not succeed unless the minimum pre-conditions are created to enable the sector to exercise its rights and meet its demands under conditions of equality with the rest of the fleets.

This article was originally published by ICSF in Samudra Report 54, november 2009. Translation by Brian O’Riordan. It is also available in French and English.