Is prawn collection in the Sundarbans good for poor Indian women?

This article brings out the contradictions inherent in globalization, a force which might reinforce structural inequalities faced by women at a global level, but can, at the same time, offer liberating opportunities to poor women locally. 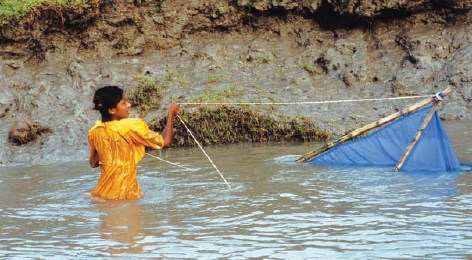 Globalization, whether it has diversified or restricted the economic options of communities worldwide, has brought significant changes in the way people perceive and live out social relations. Prawn seed collection, which started in the mid-1970s in the inhabited islands of the Bengal delta just north of the Sundarbans forest, has provoked growing criticism from environmental and NGO activists due to the catastrophic effect it wreaks on ecosystems world-wide. In this article I shall not discuss the prawn industry’s destructive nature but highlight how, in the inhabited islands of West Bengal Sundarbans, prawn related occupations bring to light dilemmas of a moral order. While they may threaten the environment, they also appear to threaten a deeply entrenched order based on traditional notions of gender and hierarchy. Island women themselves countered these criticisms in interesting ways.

The rivers and canals of the West Bengal Sundarbans are an incredible repository of fish, and its prawn fisheries have earned a considerable amount of foreign exchange for India. Among the various types of prawn that are commercially farmed, the ‘tiger prawn’ (Penaeus monodon), locally known as bagda, is the largest in size and known to have the most delicate taste. Indeed, tiger prawns have been called the ‘living dollars’ of the Sundarbans. It is estimated that around 10,000 hectares of the inhabited islands north of the Sundarbans forest have been converted into prawn fisheries. Prawn seed is collected from the rivers flowing in the southern part of the region. As the soil of this region is not very fertile and periodically gets submerged by the rivers’ salt water, a large section of the population of these deltaic islands depend on the forest for crab, wood or honey, or work in the rivers as fishers and prawn seed collectors.

Recently banned by the Government, prawn collection became very popular and was one of the most stable sources of revenue for the islanders of the Sundarbans. A couple of hours of net-pulling easily brought in more money than a whole day of farm labour would. This occupation grew rapidly after the disastrous cyclones of 1981 and 1988. The cyclones broke the embankments around many islands, causing them to be swept away. Crops worth about Rs 830 mn (US$17.7 mn) were damaged and the land was rendered saline and uncultivable. The islanders who were most affected were those living along the banks of rivers, mainly the fishers and forest workers. The little land they owned was lost and many women, to prevent their families from starving, resorted to prawn seed collection as they were offered ready cash for the prawn seed they collected.

Prawn collection developed very rapidly in the 1980s also because it was a time when the government came down heavily on those who tried to enter the Sundarban forests without passes. The passes were expensive to obtain and the officials were ruthless in extorting fines from trespassers. In the context, prawn seed collection quickly gained popularity. It could be practiced along island banks and did not entail having to venture into the forest, it could be undertaken at one’s own convenience, it was highly lucrative, and finally, it was legal and untainted with the stigma of forest-related work.

Prawn collection thus enabled the poorest, and especially women, to gain economic stability. As the islanders often pointed out, it was the introduction of prawn collection that enabled the most marginalized amongst them to afford two square meals a day. However, this occupation drew severe criticism from the village elite. In their view prawn collectors were ‘greedy’ and posed a threat to the ‘ethics’ of village life. Strikingly, the outrage of the village elite was provoked neither out of concern for the global commons of the Sundarbans nor the fact that an increasing number of women prawn collectors were falling victims to crocodile attacks. Rather it was based on an urban, middleclass preoccupation with gender-based morality and social hierarchy. The substance of the elites’ critique was that it made women ‘uncontrollable’ and the poor ‘arrogant’, because, with the money they were making, they now ‘dared’ to challenge the hierarchies of village life.

Let me illustrate this point with an example. One day while I was sipping tea at the marketplace near the village where I was conducting research, a school teacher—part of the social and economic elite in the village hierarchy—began a conversation with me. “Do you know,” he asked, “the main reason for all these prawn seed collectors’ deaths by crocodiles? It is greed. So many of these women, forgetting their children, run at the break of dawn to the river with their nets, to pull in dollars! The American and Japanese taste for tiger prawn is spoiling our traditional way of life. Now the women don’t stay at home to cook for their husbands, all they’re interested in is making money.”

Later, one woman, Arati, a prawn seed collector who had overheard this tea-shop conversation, asked in a sarcastic tone, “Do you know what he actually meant by ‘traditional way of life’? He meant being able to exploit us on his fields for a few rupees. Prawn seed has saved us; they are the living dollars of the Sundarbans, and we will win against the landed gentry and their ruthless exploitation. I can now not only support my children’s education but also buy myself a new pair of slippers when I need them.”

The antipathy of the village elite towards the prawn seed collectors has to be understood also as a struggle for control of the local economy. The land-owning elite resent the fact that sharecroppers and wage labourers, after the entry of prawn-seed collection, refuse to work their fields for the meagre wages they were earlier paid. The women now prefer to collect prawn seed and sell it to the highest bidder. They prefer to borrow money from prawn dealers who are people from their own socio-economic milieu rather than from the landed elite.

While studies have argued that globalization has been detrimental to women due to the growing structural gender inequalities it has given rise to, the view held by many women, especially those from lower socioeconomic backgrounds, is that it has given them greater opportunities to challenge pre-existing patriarchal norms. They feel more empowered compared to an earlier generation of women.

Arati’s critique of the school-teacher’s condemnation of poor women and their bid for economic autonomy brings out the dilemmas of negotiating morality. The experience of globalization amongst poor women after all can also be an expression of a basic aspiration: the aspiration for human dignity.

This article was originally published by ICSF in Yemaya 32 (November 2009). It also available in French.