The history, philosophy, principles and methodology

One of the lessons learnt by the Brazilian Landless Peoples’ Movement (MST) is that the claim to land is only meaningful if it is linked to all human and social rights, including the right to education. Starting in 1987, the MST therefore developed a specific strand to work on the question of education of the landless. This work is carried out in the 23 States of Brazil where the MST are present, either by the people who are in charge of the camps and land that is occupied, or via the teams of educational staff designated for the different zones. There is also a national Educational Collective, composed of all the representatives of the different States that meets about three times a year to propose actions and to meet needs. This is how the MST has built a complex educational structure that covers child-minding facilities, as well as primary and secondary education and that has been supported by many national and international institutions. It has progressively won international recognition. 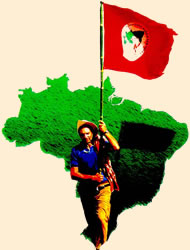 a) The Front for Educational Work, responsible for validating actions taken by the branch

b) The Front for Infant Education that includes all the activities from pregnancy care and that also includes working with parents on the education of young children: nutrition, therapy, and pedagogy for children under 6

c) The Primary Level Front aims at organizing the creation of schools on occupied land, taking both local and collective needs into consideration. This includes ensuring that classes are geared to development in rural areas so that young people and adolescents are convinced of the need to remain on the land

d) The Educational Front for Youth and Adults is in charge of ensuring that elementary rights such as reading and writing are respected. The objective is to do away with illiteracy on the lands that the movement occupies.

e) The Cadres and Leaders’ Training Front includes the people responsible for working on content, the pedagogical project, training and courses that cover all aspects of the 2nd and 3rd degree of the framework of the MST project.

The philosophical principles of MST education (which are valid for all the different levels of education) are inspired by the work of major philosophers, particularly Paolo Freire. Education is seen as a means of social transformation; it is a window to a new world; education on work and co-operation; education aimed at the development of all aspects of the human being; education as a permanent means of training and transforming human beings.

The pedagogical principles (that are valid at all levels) are the following:

The methodological lines for working in schools are to:

1) Develop a love for working the land and build enough knowledge to be able to face the challenges posed by both the land that is occupied and the fields in terms of education, health, housing etc.

3) Support the cultural development of all those living on occupied land, reaching beyond the classrooms and also launching literacy campaigns for adults, jointly producing local newspapers and organising cultural events etc

6) Ensure that schools are a place where people can reflect on values for a new society (solidarity, friendship, equality, fraternity, peace, justice etc.)

1,800 primary schools currently exist on land that is occupied by the MST, with 160,000 children and adolescents attending. In spite of this, many children in the camps do not attend school, because they are not legally recognised and also because there is a lack of understanding for an overall programme of education that is adapted to the children of rural workers. Over 250 people work in the education of the under 6 in the kindergartens on the occupied land, and about 3,900 in the schools. There are also about 3,000 people working on the literacy programmes that are working with 30,000 young people and adults. Most of these teachers work on a voluntary basis. Schools on the occupied land are open to everyone. There has also been a specific effort made in Rio Grande do Sul, where in 1996, thanks to the approval of the State Educational Council, an “itinerant school” for children between 7 and 12 was created; it moves from camp to camp.

The clear commitment of the MST to work towards strengthening their organisation via the elementary and higher school education of activists has led to their receiving national or international prizes on several occasions. The movement encourages training of the professional leaders in all sectors by signing agreements with universities in various Brazilian States as well as abroad (as is the case for example with the Cuban Faculty of Medicine). One of the innovative aspects of this experience is that in the training process as much importance is placed on the productive work as on conflict management, national realities, training of managers etc and also the importance granted to artistic and cutural expression tas they are considered to be the basis of a legitimate participation in the groundwork of people’s personal development.

* The technical Institute for training and research in agrarian reform (ITERRA) - the Josué de Castro Technical School is a school run by the MST housed in the building provided by the Capucin Monks in the touwn of Veranopolis (State of Rio Grande do Sul). This school runs on an apprenticeship basis. This involves the students going to class for two months and then returning to their occupied land to apply what they have learnt. It is run as a cooperative, and the students (currently 400 of them) are involved in the running of the school. There are secondary level courses on offer as well as both general (“magistral”) and technical ones. Some of the courses on offer are training courses for health technicians, communication technicians, technicians in cooperative management, technicians in the management of occupied land, as well as a specialisation in the managment of cooperatives that is run in partnership with two other Brazilian universities: the University of Brasilia (UnB) and the University of the State of Campinas (Unicamp). ITERRA offers courses to help workers in that region to catch up on basic primary and secondary level education.

* As well as offering courses in partnership with these institutions, the MST also has its own way of supporting students who choose to follow traditional university courses in national or international universities. This has involved their signing contracts and developing projects and programmes with over 60 universities from both the public and private sector as well as international ones (the Latin-American medical school in Cuba). And with international organisations, private foundations and NGOs, State and local authorities etc.

* Agreements have also been signed with certain universities for the intesive training of young people from MST. They focus on knowledge of national realities. These courses take place in the Federal University of Juiz de Fora and many others.

* The MST organises or participates in national and regional meetings on themes connected to education. This was the case with two national meeting of educational staff involved in the agrarian reform (1997 and 2001), the meetings organised in the framework of the campaign for rural elementary education (cf above), various national meeting between staff working with the MST and finally all sorts of meetings and events organised by the MST where education was one of the various themes.

* In the field of culture, the MST organise “art and communication workshops” involving people who work in communication, artists and educational staff from the occupied lands, art classes and theatre, the latter in cooperation with the Centre for the Theatre of the Oppressed, as well as regional and national seminars aimed at discussion on cultural issues (training of the Brazilians, of the nation, their cultural expression, their diversity and differences, their art forms etc. There are national essay and art competitions for MST school children and students. These are on a different theme every year (in 1998 it was “The Brazil we would like”, in 1999 “Fifteen years of MST” and in 2000-2001 “Brazil, how old are you?”).

* Finally, the MST take part in the Coordination for rural primary school education, created following a conference that took place in June 1998 that was held with national organisations (The National Conference of Bishops of Brazil, The University of Brazilia) as well as international organisations (UNESCO, UNICEF). A seminar on this theme was held in 2000 with the Federal Chamber (the Brazilian National Assembly). They published three booklets in a series entitles “In favour of rural primary school education”.