How Deep Are Our Treaties

Faced with the commodification of food and livelihoods in the fishery of Canada’s Bear River First Nation, a Mi’kmaq community displays remarkable resilience

« As long as the sun shines,

as long as the rivers flow

we will stand fast to what we agreed to.

I’m not sure if all parities understand,

How deep our treaties are. » 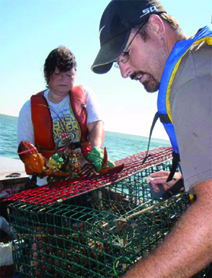 Until recently, the only mechanism to deal with ancestral land appropriation and displacement of indigenous peoples in Canada was the cumbersome Comprehensive Land Claims Process. The Supreme Court of Canada decision, known as the ‘Marshall case’, based on the Mi’kmaq treaties of 1760 and 1761, extended those claims to the waters, and initiated a treaty negotiation process for the Nova Scotia Mi’kmaq. In the interim, however, the Government of Canada implemented ‘commercial’ fishing agreements, styled as ‘MacKenzie agreements’, after James MacKenzie, the negotiator for the federal government.

As a point in case, the Bear River First Nation (BRFN) has its own vision of a food and livelihood fishery based on a long historical relationship with the natural world, premised on respect and self-sufficiency to avoid hunger and sickness. This relationship is known in the Mi’kmaq language as netukulimk. Unfortunately, the increasing commodification and privatization of the commercial fishery is leaving little room for sustainable community practices and knowledge. Nowhere is this more evident than with the imposition of the individual transferable quota (ITQ) system on the scallop and most of the ground fisheries. Echoing Chief Frank Meuse, Jr., the BRFN feels that these fishing agreements serve only to integrate First Nations into the commodification process, watering down treaty rights. This is why the BRFN chose not to sign on to any fishing agreements.

While analyses of the Marshall decision of 17 September 1999 and the subsequent qualification, known as ‘Marshall 2’ , of 17 November 1999, have been well documented, the emphasis in the latter has been on ‘commercial’ fishing rights as being subjected to current regulatory regimes. Marshall 2, however, also emphasizes local community: “The treaties were local and the reciprocal benefits were local. In the absence of a fresh agreement with the Crown, the exercise of the treaty rights will be limited to the area traditionally used by the local community with which the ‘separate but similar’ treaty was made” (R. v. Marshall, [1999] 3 S.C.R. 533).

BRFN’s ancestral lands are located in once-lucrative fishing areas. However, the current regulatory regimes and ITQ systems are displacing both indigenous and non-indigenous fishers from local waters to make way for distant licence—and quota-holders and large-scale fishing enterprises.

The integration of First Nations into the commercial fishery is often noted as a success. BRFN, however, feels that it has undermined their treaty rights, as industrial activities like mining or wind power generation encroach on their ancestral lands and waters.

Although there is a legal obligation to consult First Nations on activities that threaten ‘aboriginal’ rights, consultation rarely reaches the local level, and when it does, it is usually in very fragmented government- or industry/market-driven processes that serve only to divide communities. One exception was the ‘White Point quarry case’, in which an environmental assessment panel recommended the quarry not be approved since the ‘core values’ of communities would be adversely affected.

BRFN continues to pursue its vision of a small-scale food and livelihood fishery by aligning with other local non-indigenous fishermen who have also been affected by privatization and commodification, and by continuing to learn and practise netukulimk. It has undertaken several initiatives to support netukulimk, such as restoration of fish habitats and streams, building up a food fishery for the entire community, and exploring community-based governance models. BRFN has also been involved in the making of In the Same Boat, a film by Martha Steigman, a doctoral candidate and activist from Concordia University. It has also worked with Coastal Learning Communities Network, alongside Arthur Bull, Executive Director of the Bay of Fundy Marine Resource Centre, and social anthropologist John Kearney. It has also been involved with World Forum of Fisher Peoples (WFFP).

Proponents of corporatism find it difficult to grasp the fundamental principles of balanced human-ecological interrelationships. Indigenous peoples around the world seem to instinctively know that overexploitation of natural resources for the profit of a few will only spell ultimate demise.

Canada’s disregard of traditional practices and technologies was evidenced in March 2009 when it refused to support small-scale fisheries at the 28th session of the Committee on Fisheries (COFI) of the Food and Agriculture Organization of the United Nations (FAO). Canada has further eroded its credibility by refusing to endorse the United Nations Declaration on the Rights of Indigenous Peoples, which contain the principle of “free, prior and informed consent”.

However much Canada tries to deny its colonial history and neglect of the rights of indigenous peoples, the plain fact is that indigenous, traditional and customary practices are necessary to cope with hunger and poverty around the world.

This article was originally published by ICSF in Samudra Report 54, november 2009. This article is also available in French and Spanish.

Overview of the Mi’kmaq. mikmawey.uccb.ns.ca/overview.html

In the Same Boat: film. inthesameboat.net

Canada’s Position on the UN Declaration on the Rights of Indigenous Peoples. www.ainc-inac.gc.ca/ap/ia/pubs/ddr/ddr-eng.asp