This Belongs to Us

The fishers of the Indonesian island village of Lamalera have an age-old tradition of whaling that mixes social, cultural and economic practices to sustain livelihoods 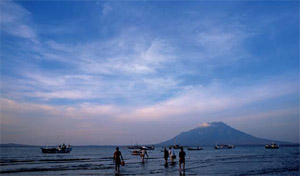 As traditional whalers, the Lamalera people are bound to a series of traditions and customs related to their daily lives, starting with the construction of special vessels for catching whales, known as pelédang (also called téna lamafaij in the local dialect), backed by unique gear, and a system of rules of engagement, proscription and taboos relating to fishing, as well as special ways of dividing the catch.

As a community that relies entirely on catching fish for a livelihood, going out to fish is a daily routine for the Lamalera people. Traditional factors and seasonal conditions determine how fishing activities are undertaken.

The official fishing season (mussi léffa or léffa nuang, meaning ‘dry season’) is from May to September. During this period, many whales and fish appear in the Sawu Sea off east NTT. The léffa nuang starts with a ceremonial customary declaration requesting the community from both the villages (Tétti Leffo and Lali Fatâ) and the landowners (tana alep) to gather to discuss the ola nuâ (all activities related to earning a living from whaling). This event is called tobu nama fattâ. The Lamalera community always starts the léffa season with this ceremony, which is characterized by the following elements:

The unofficial fishing season called Plaé ba léo, is marked by Lamalera fishermen yelling, “Ba léo…ba léo…!!” This repeated yelling is meant to urge other fishermen to immediately go out to the sea to chase the whales.

Usually, vessels entering the sea during the Plaé ba léo are not as many as during the léffa nuang, and only those vessels that are in good condition venture out. Plaé ba léo can occur anytime, depending on when and where the whales show up. The Lamalera fishermen employ a procedure to catch whales. In case a whale breaks through the sea surface, spraying water, the Lamalera fishermen will first lower the sail and the mast of the vessel they are in. This is to signal to the people ashore that the vessel is preparing to catch a whale. This period is called téna mété pérra kotéklema.

After the sail and mast of the vessel have been lowered, under the leadership of the lama fa (the chief member who harpoons the whale), all crew members pray together, and then the lama fa sprinkles holy water on all the crew members as a symbolic gesture of cleansing body and soul. This constitutes the taboo period during which crew members are forbidden from mouthing rough or unmannered words to one another. They are also refrained from uttering the names of members that are related to locations like serani, kupang, etc. Should this prohibition be violated, a disaster may occur, so runs the traditional belief.

If unkind words are uttered, the chances of catching a whale are slim, the Lamalera believe. The lama fa may find it difficult to harpoon a whale or, if he does succeed, the harpoon may break loose from the whale’s body. This condition is called ikâ nabé tobang liér héna. In the event of utterance of prohibited names, the whale, it is believed, will drag the vessel to the location wrongly mentioned.

The lama fa, assisted by the bréung alep, ties the harpoon to the lékka (long bamboo pole). The lama fa then starts walking towards the hâmmâ lollo, and takes position to harpoon the whale. Before this, he seeks the approval of all crew members. Approval is indicated by the crew members saying “Ikâ titté” (“that belongs to us”). In case of disapproval, the crew will say “Ongaro”.

Once the crew’s approval is obtained, the lama fa immediately harpoons the whale, while jumping into the sea (tuba nabé dopâ). The vessel is now commanded by the lama uri (helmsman) and the bréung alep. The helmsman’s main task is to steer the vessel while it is being pulled by the whale, and the bréung alep’s duty is to pay out the rope attached to the harpoon. The safety of the vessel and its crew depends very much on the skills of these two persons. In case the lama uri is unable to manoeuvre the vessel, it could capsize or crash on to other vessels, endangering the lives of the lama fa and the other crew members. The Lamalera people’s motto of “life and death at sea” imparts a fighting spirit that makes them risk their lives for the sake of the lefo tana (homeland) and atta kiddé knuka (widows and orphans).

It is difficult to imagine the physical resistance that a whale can put up. However, experience shows that a whale will surrender after being harpooned thrice. Once the whale’s spittle gets mixed with blood, it is a sign that it has surrendered. The crew then have to only haul in the giant mammal to the shore. Slowly, the powerless whale is pulled near the vessel and several crew members jump on its body to knife it with the duri (a long knife) and beladda (bayonet), while other crew members stick the ganco (kenaté) into its nose and rear fins. Then the dead whale is fastened to one side of the vessel and taken to shore. As a token of gratitude, all the crew members then pray to the gods for their blessings. They oar out to the shore with the catch, singing happy songs like “Ribu lefo golé, tubo béra raé mai” (“All the people of the village, let’s quickly pull the whale to the shore”).

It is the lama fa’s duty to choose the right type of whale to be caught. According to the Lamalera tradition, certain types of whales should not be harpooned to avoid potential danger to the vessel and the crew. Among these are :

Both the meat and the skin of the whale are dried to extract oil. They are also bartered for food from the hinterland, while the whale oil is used as fuel for lamps. The whale’s teeth are used to make souvenirs, like rings and cigarette holders. The bones are burnt and used, along with crushed rocks, for building construction. Mudu is the whale’s fat preserved by salting, which maintains its quality for two or three years. Mudu can be consumed as such or used as an accompaniment to vegetables. Another part of the whale, called ika napung, which is the meat remaining stuck to the bones, is dried and preserved for hard times or to go with the palm tree drink.

Ola nua or catching the whale is a way of life that supports the spirit of the Lamalera community. This longstanding practice reflects many aspects of life and living among the Lamalera people, including theological, spiritual, social and cultural dimensions, and not just economic aspects.

This article was originally published by ICSF in Samudra Report 54, november 2009. Is is also available in French and Spanish.

The Whale Hunters of Lamalera, Indonesia (synopsis of film). www.therai.org.uk/film/volume-iicontents/the-whale-hunters-of-lamaleraindonesia/